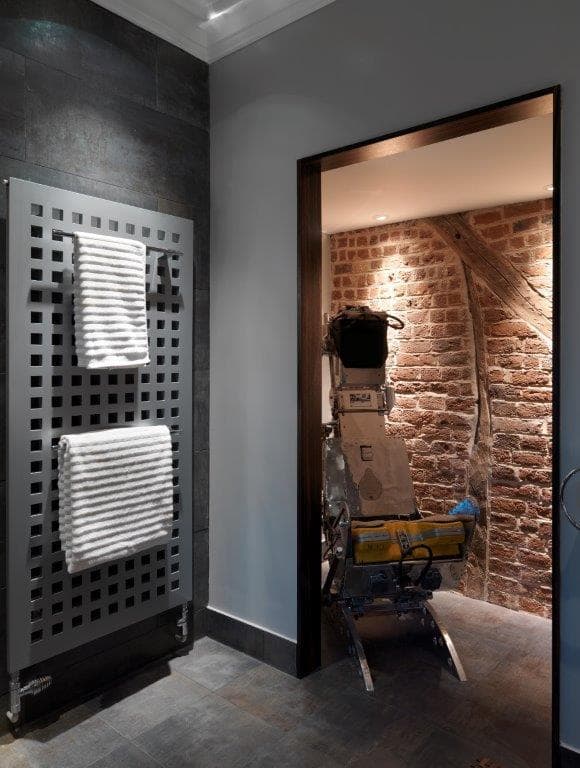 INSPIRED BY A LANCASTER BOMBER

When I was commissioned to create a contemporary en suite walk-in shower room for the gentleman of the house, the house being a former stately home in Hertfordshire, I was genuinely surprised when he said that he wanted an aeroplane seat to be included within the design and for it to influence the overall look of the space.

However, when I saw the refurbished seat, resplendent with its original parachute, I realised this was not the type found on a passenger aircraft, but one from the interior of a WW2 Lancaster Bomber. It was like a childhood dream come true to see this incredible piece of aeronautical design in front of me, when the nearest I had come previously was when I lovingly made Airfix models of Lancaster Bombers as a boy.

This duly inspired me and my team to design the shower room in a distinctly simple style and we restored the old wall to feature bare brick. We then contrasted this with dark 333mm x 1000mm Ruggine horizontal wall and Ferro 333mm x 333mm floor tiles that have a grey hue, together with minimalist brassware by Hansgrohe Axor Uno. For the thick glass divider shower screen, we engaged a specialist glass company to manufacture to our specification and it included LED lighting laminated within the screen. We sourced a deep grey industrial style radiator by Bisque B2 and the walls were painted in half silver grey by Zoffany. We also handmade a vanity cabinet, a mirror surround and open shelving in Macassar Ebony, a rich dark timber with a two-tone effect.

During the war, the Avro Lancaster flew over 156,000 raids and was the aeroplane used to transport the ‘Upkeep’ Bouncing Bomb developed by Barnes Wallis – a depth charge that literally bounced across water and was used to attack Mohner, Eder and Sorpe Dams in 1943, greatly weakening Nazi Germany’s industrial base. The operation ‘Chastise’ was made famous in the film The Dambusters which featured the heroics of the RAF’s 617 Squadron and the Lancaster’s in which they flew. Only 17 Avro Lancaster bombers survive in tact today.

For more information about your next bespoke bathroom or walk-in shower room, please get in touch.

Go Back To Blog