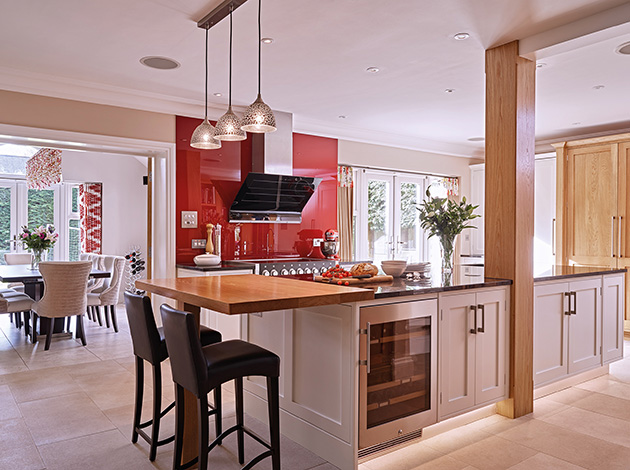 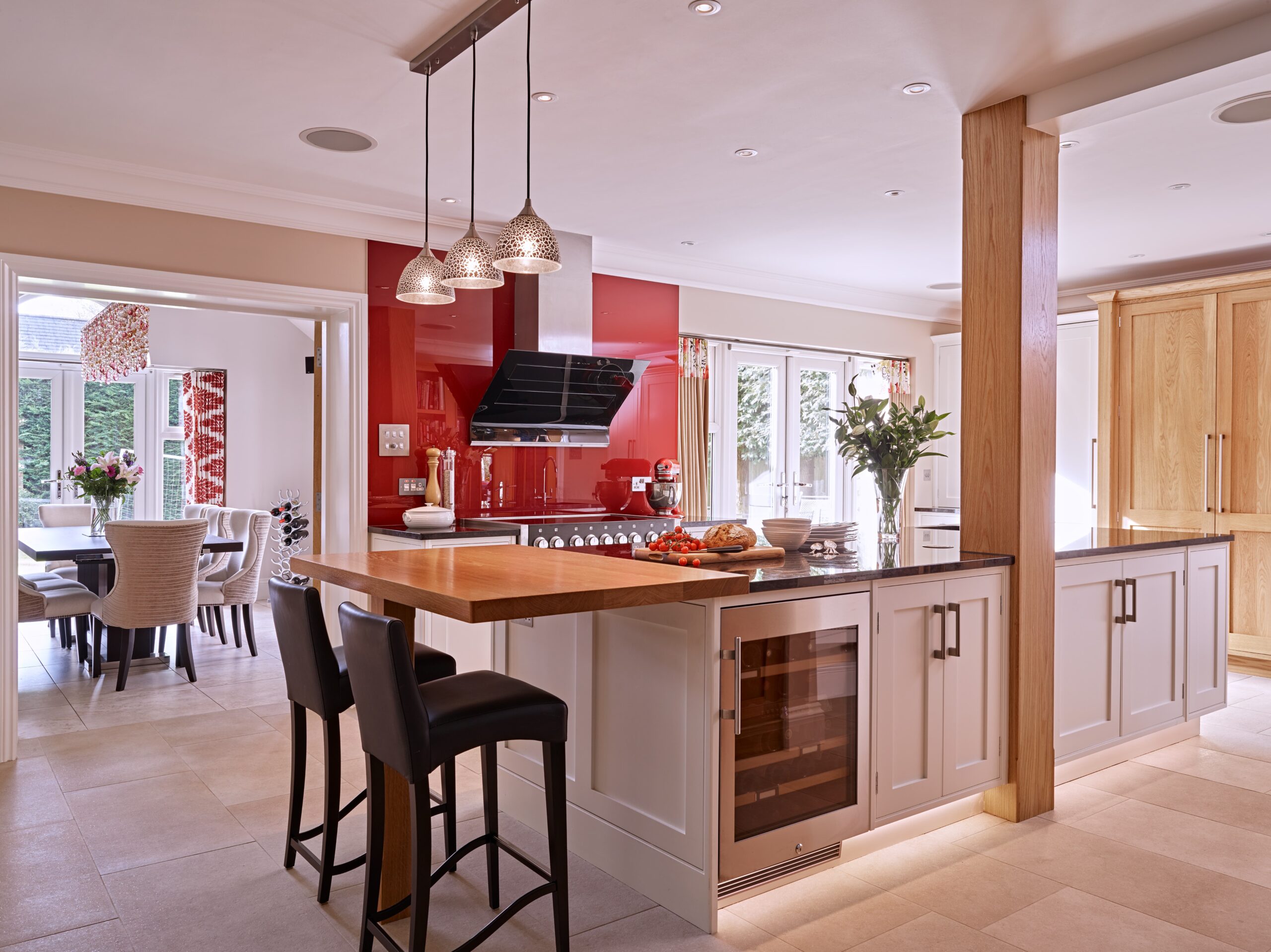 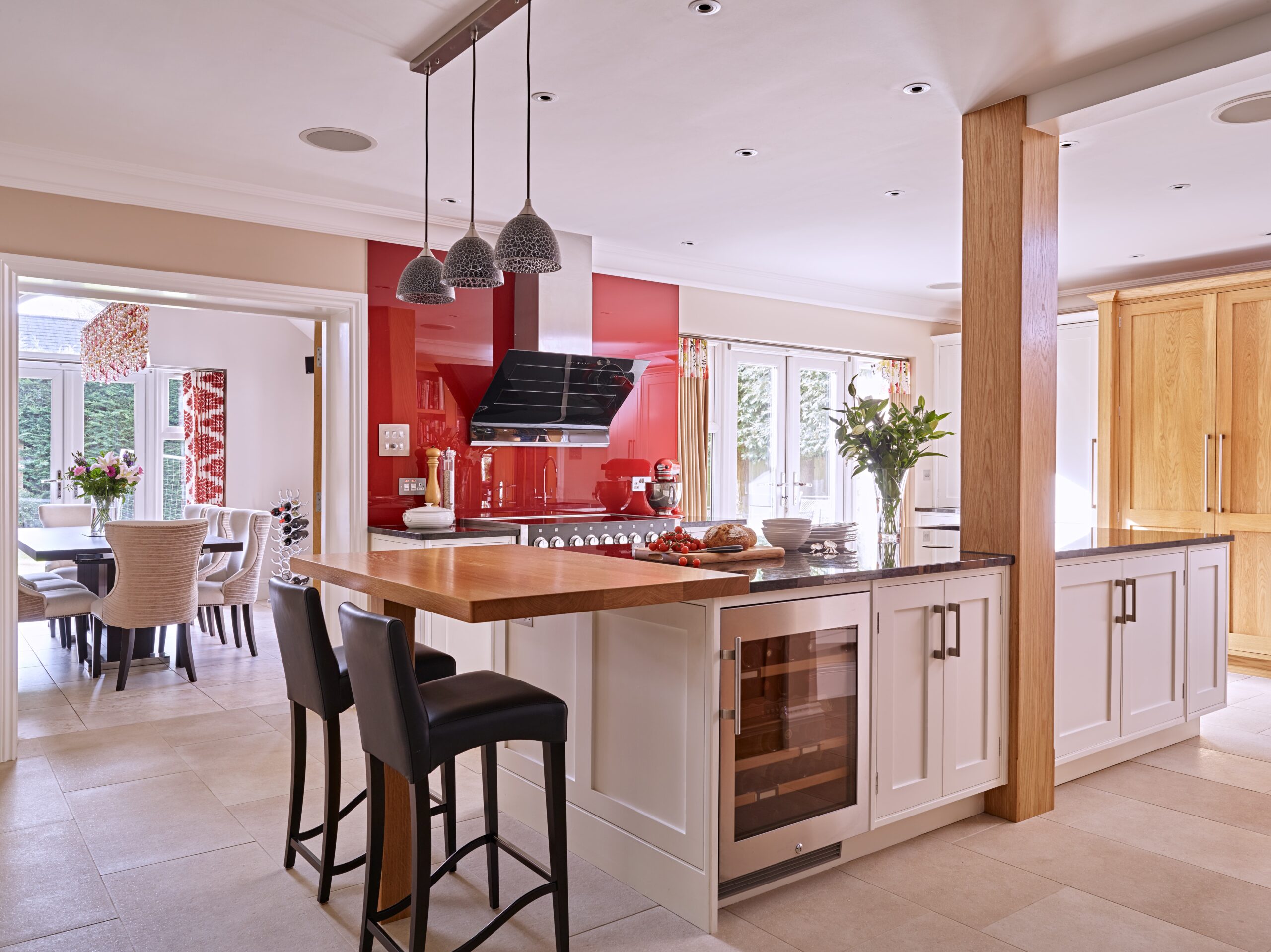 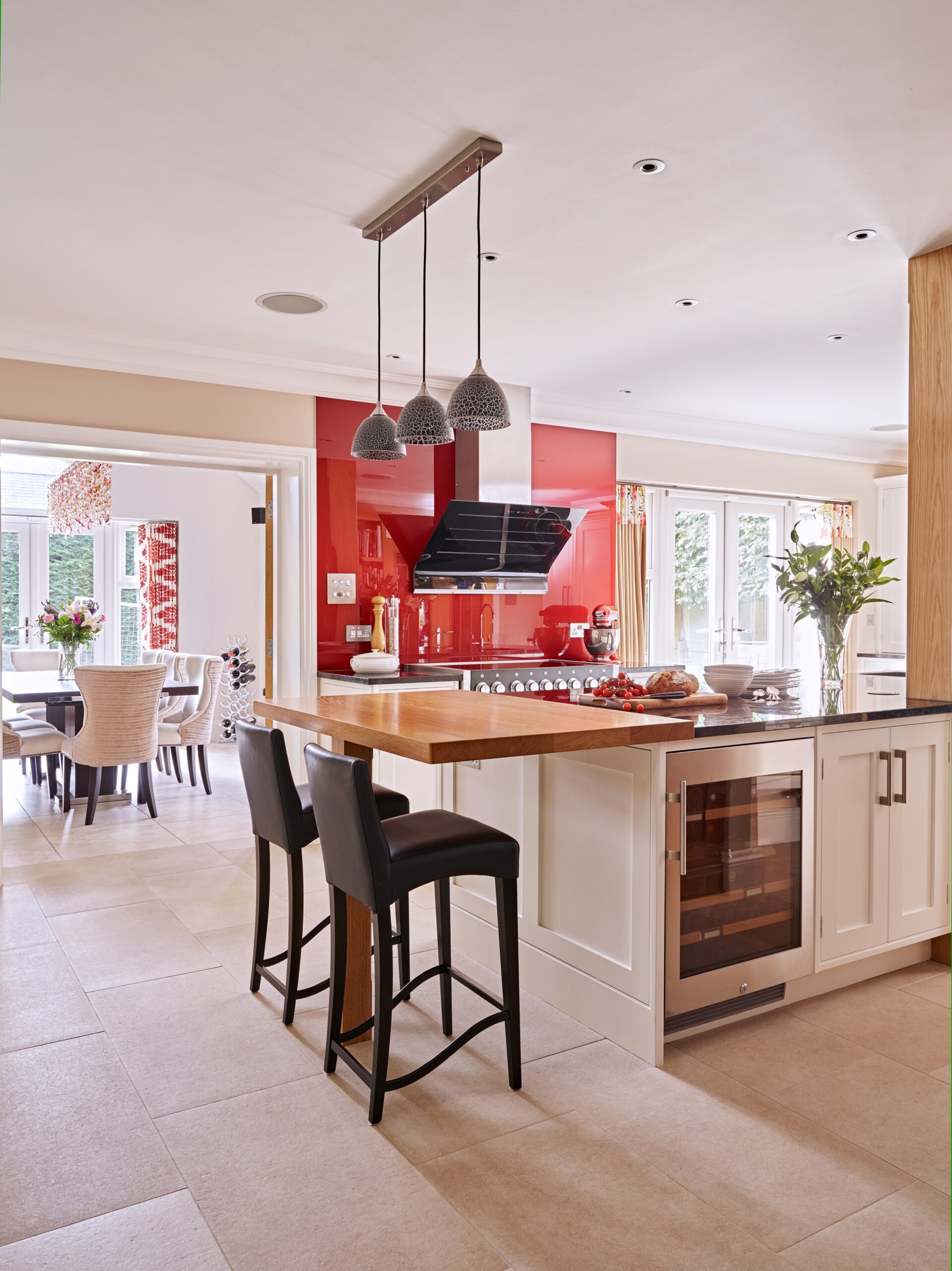 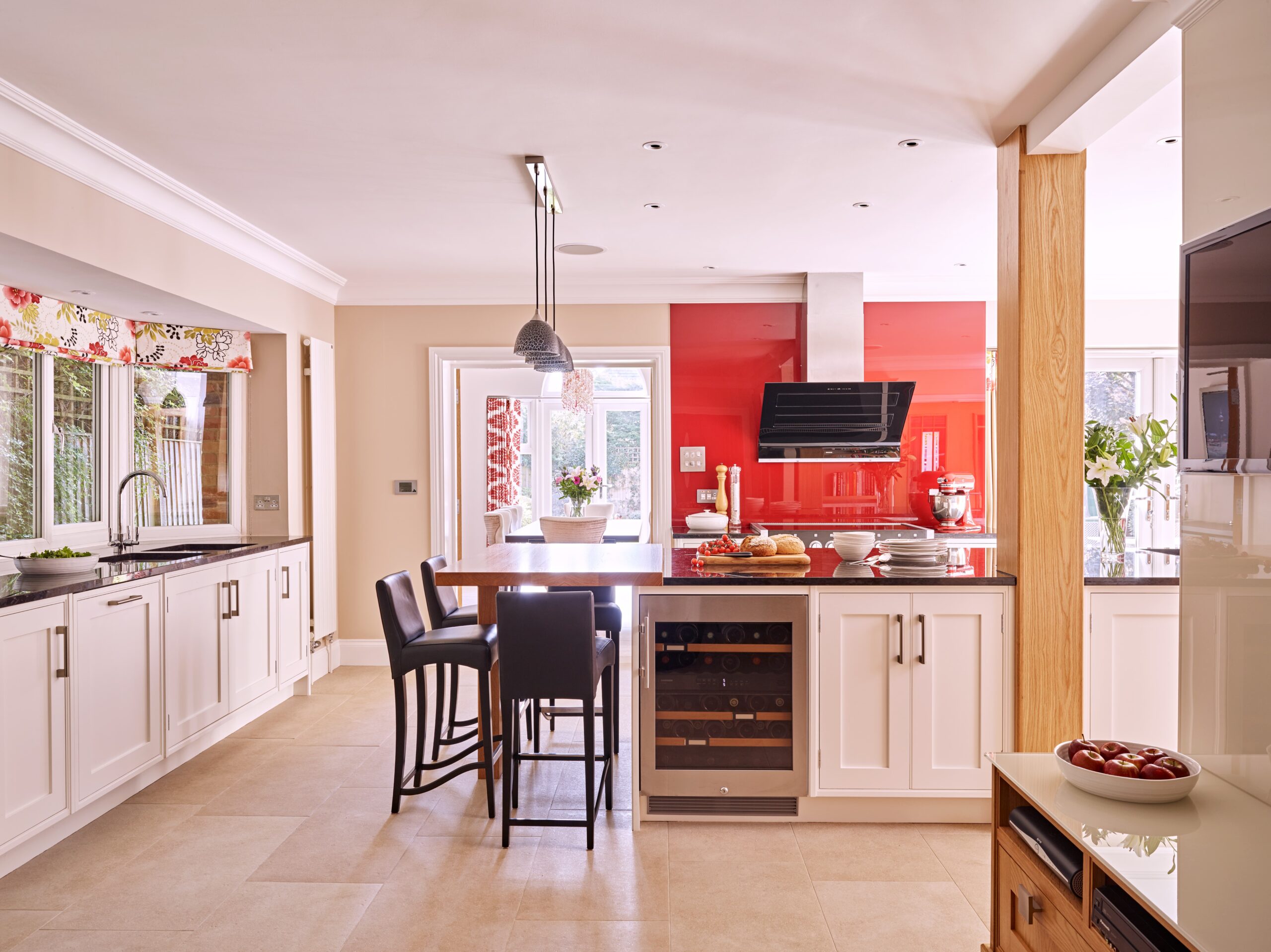 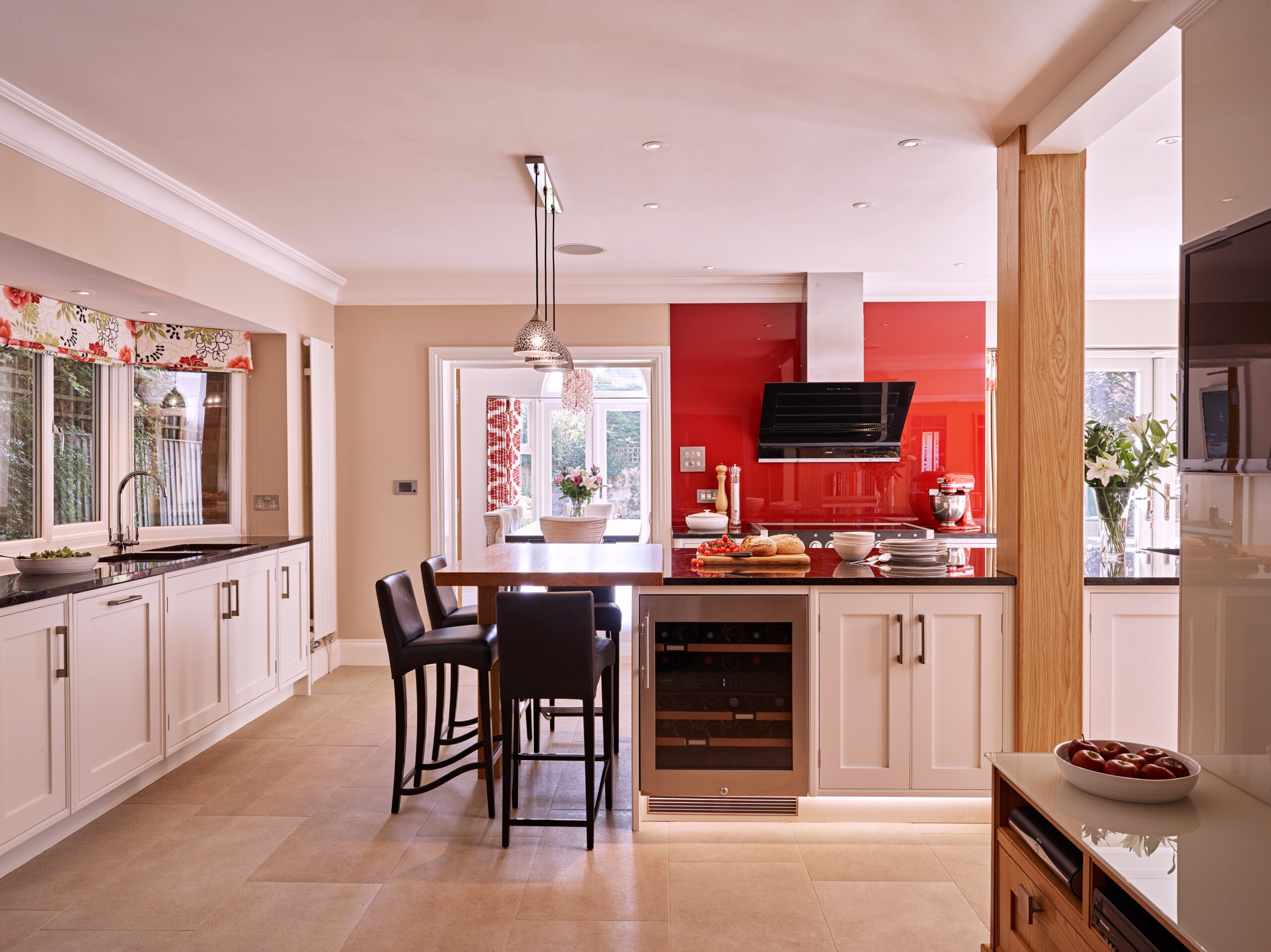 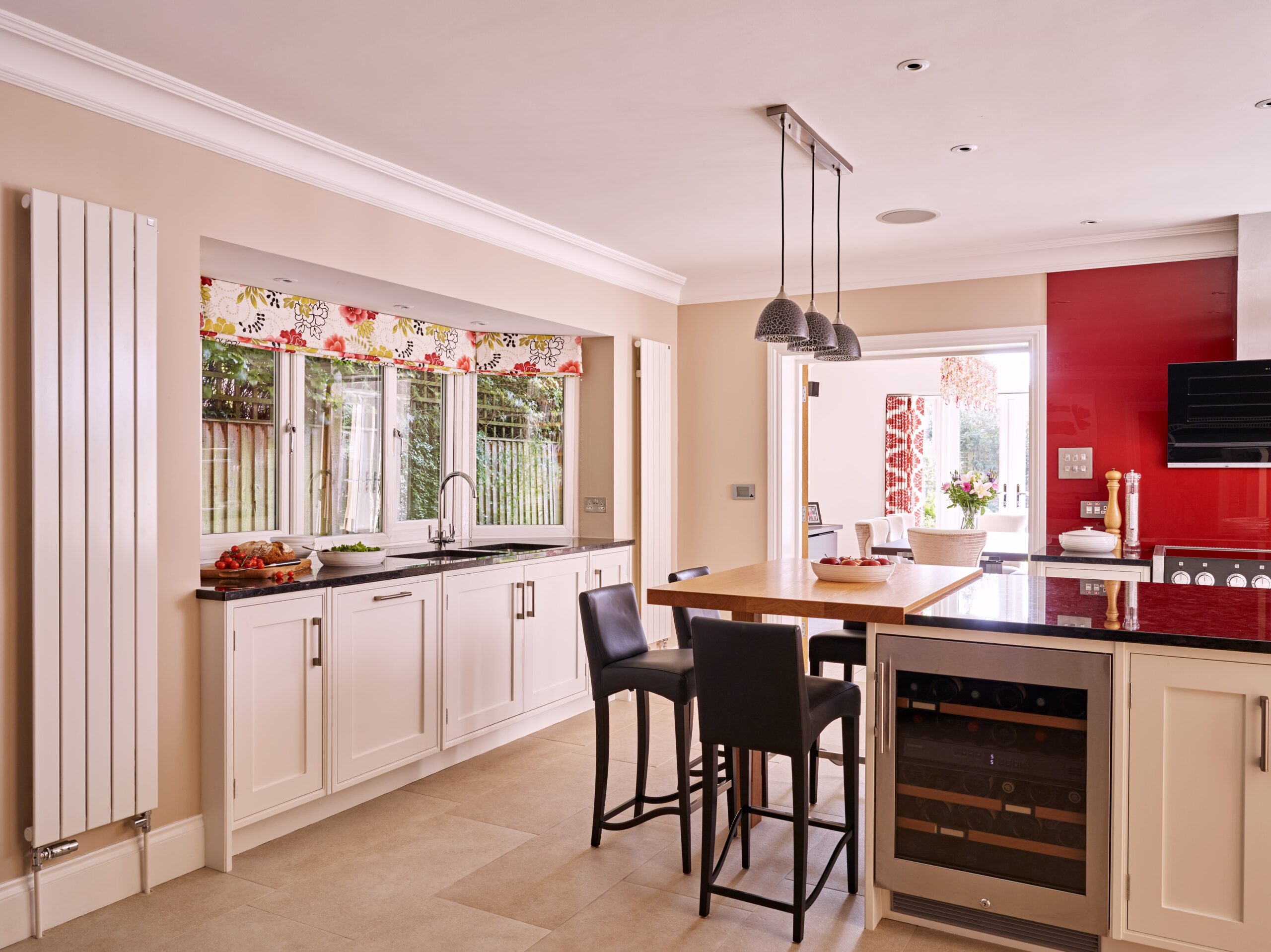 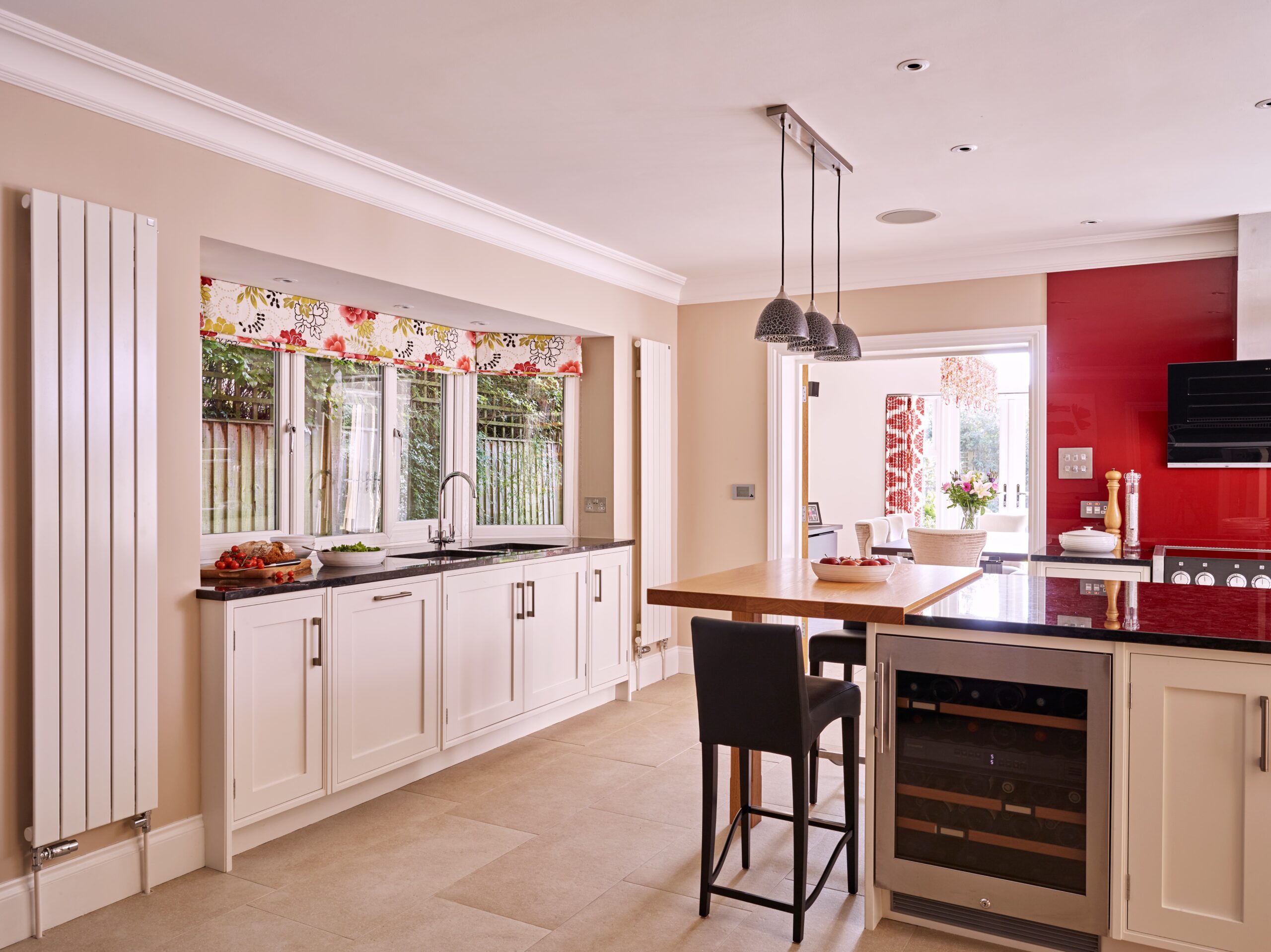 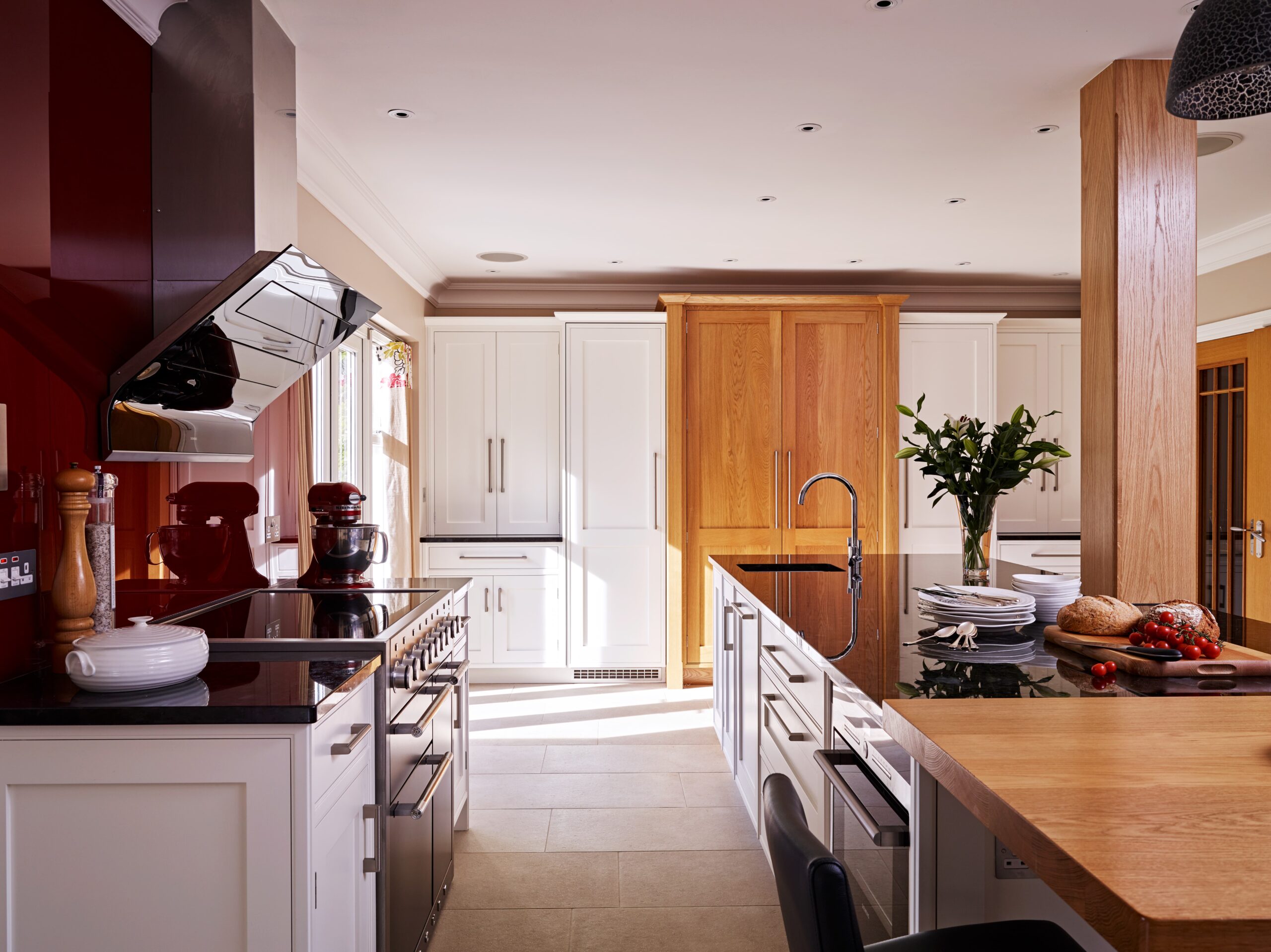 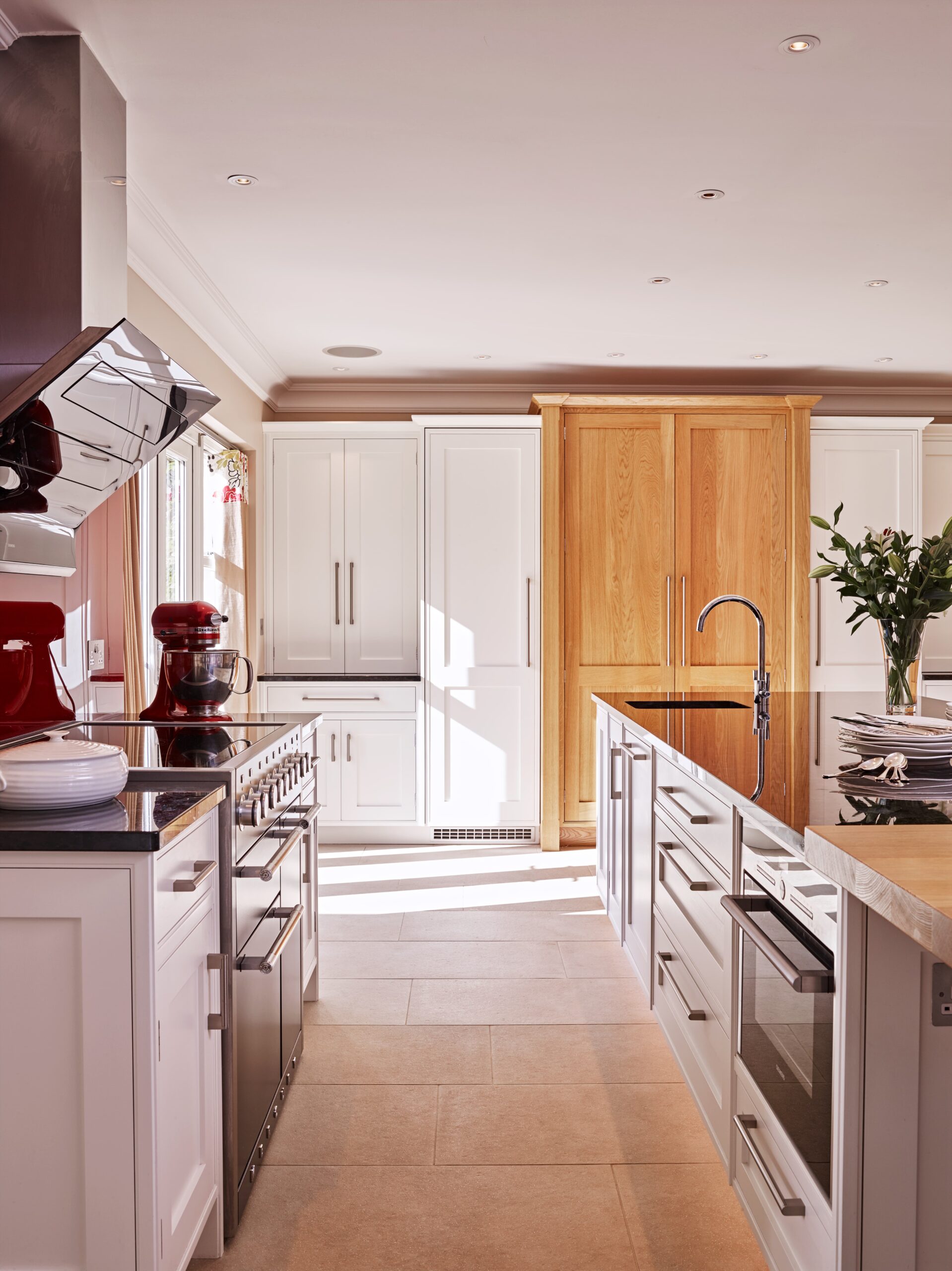 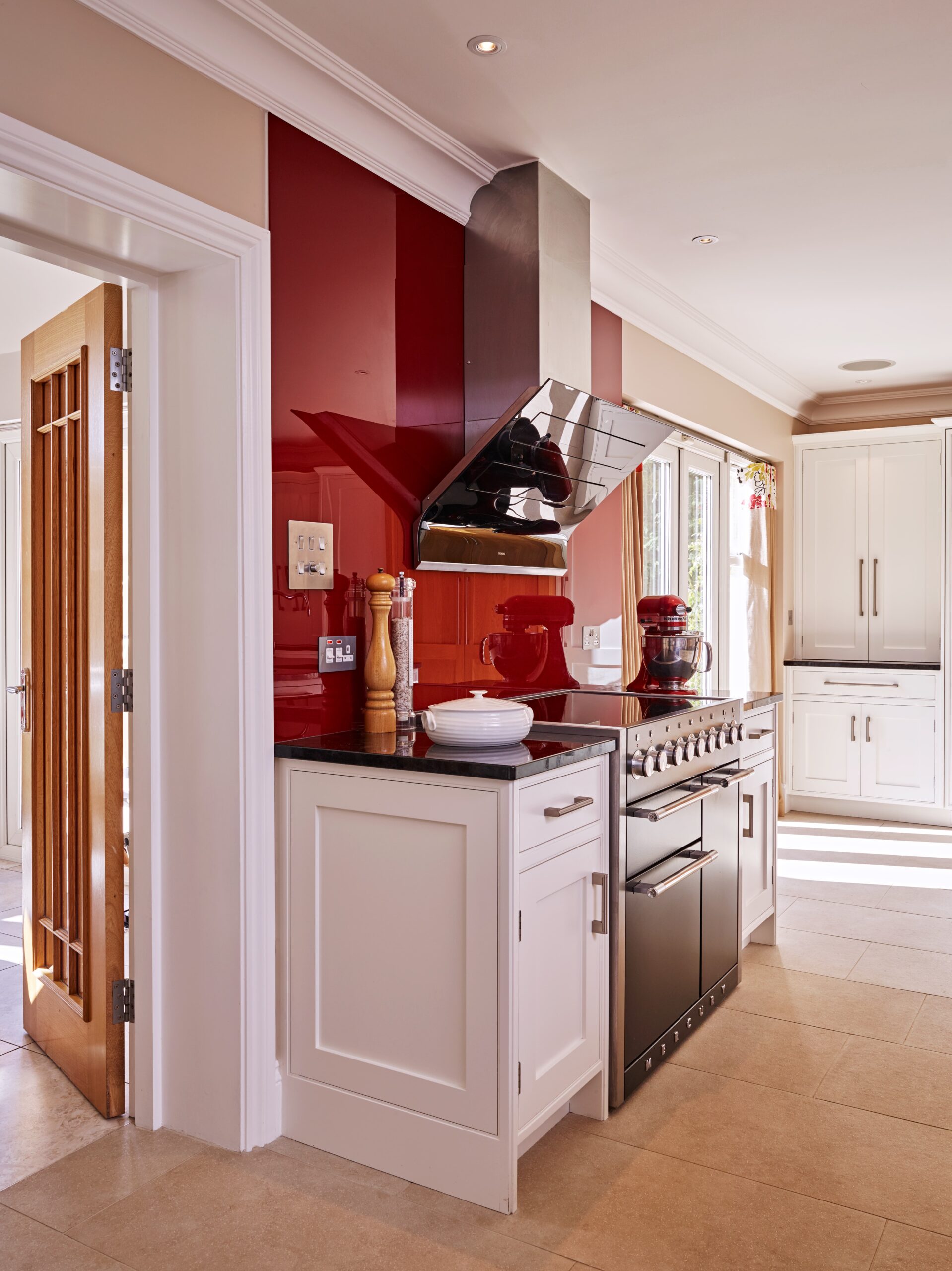 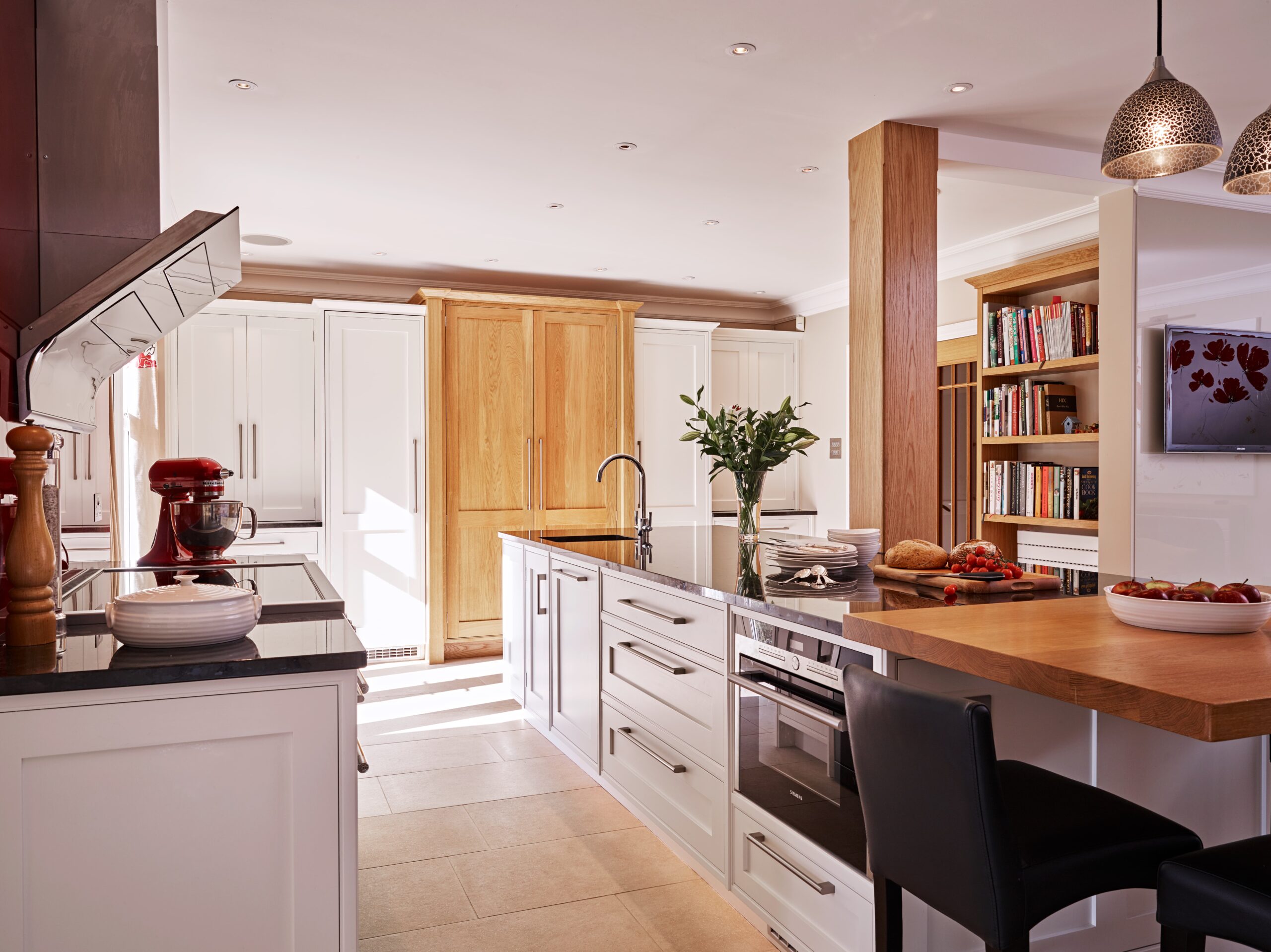 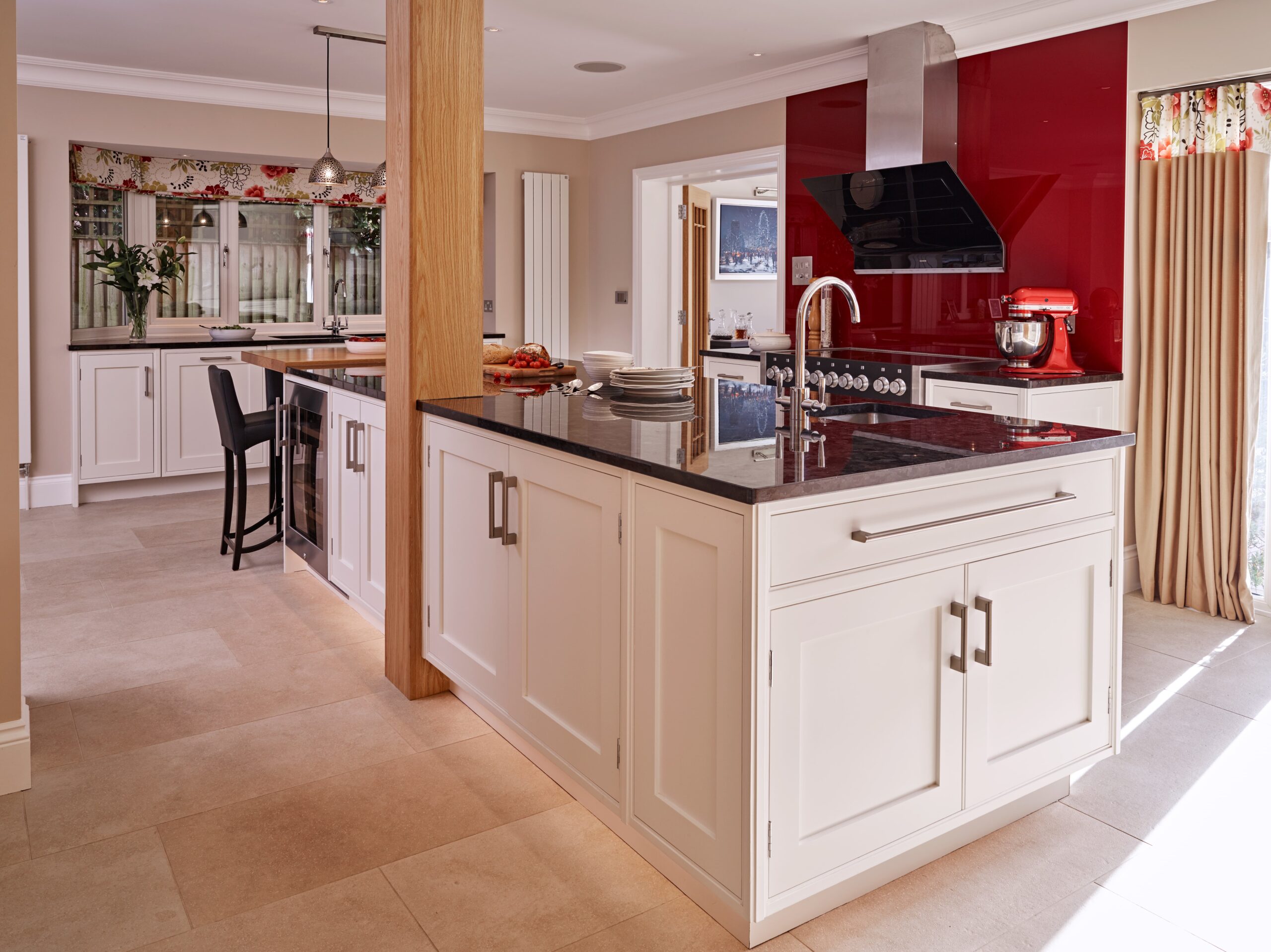 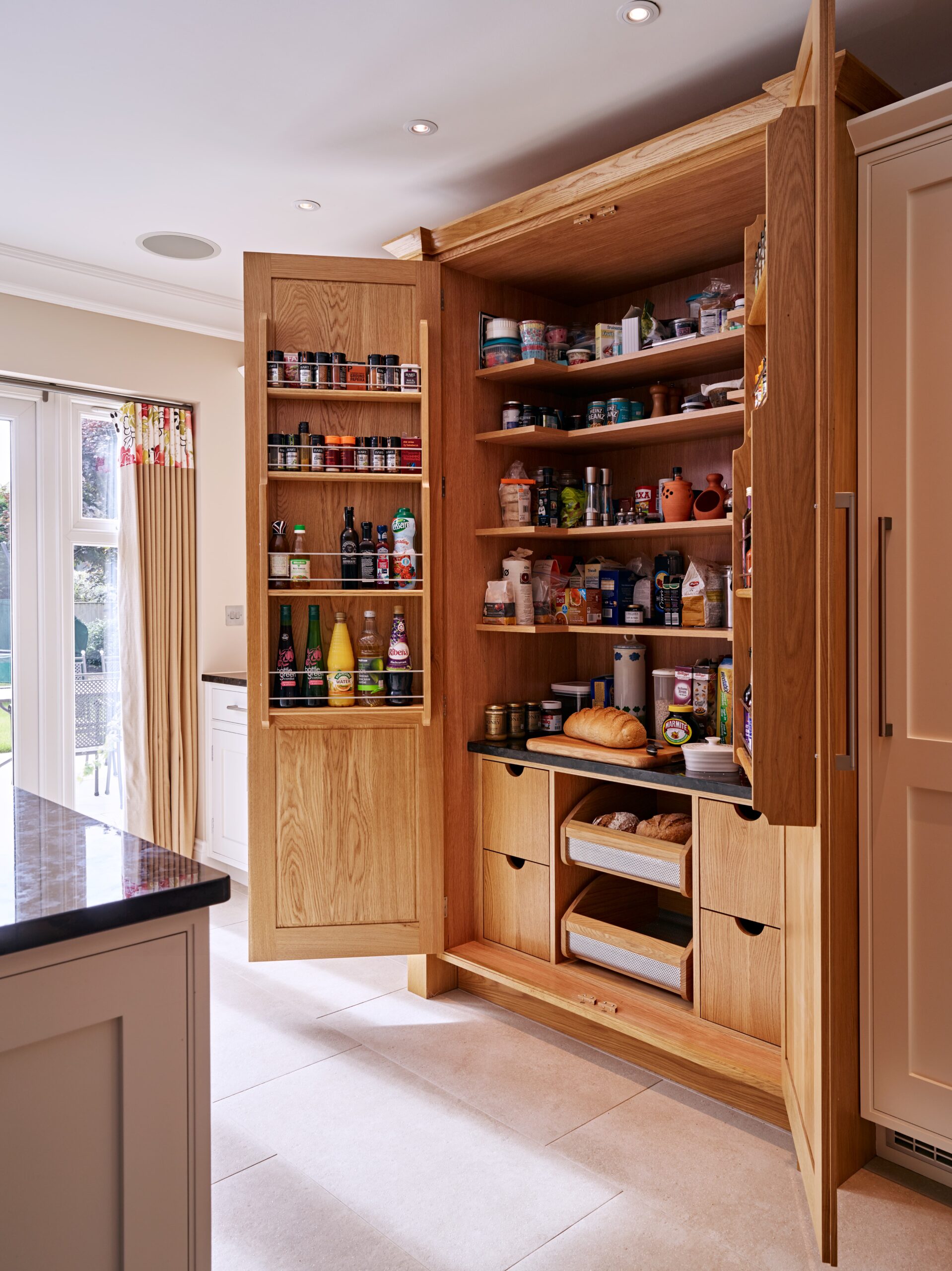 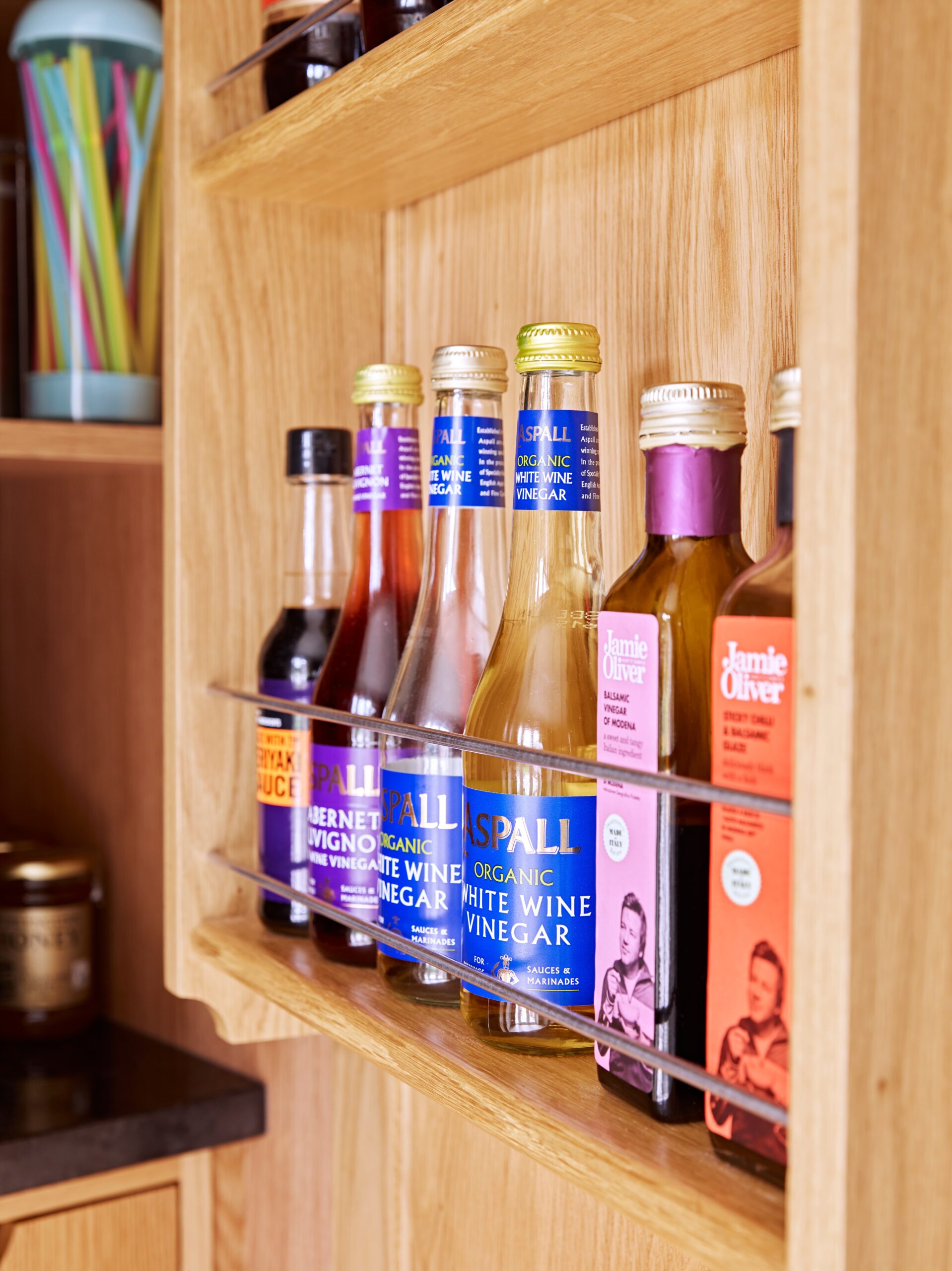 A timeless Shaker kitchen and pantry

As part of an existing traditional-style family house, our client was seeking a complete redesign of their ground floor area to create a large kitchen which was to also comprise a space for informal dining and entertaining.

To be in keeping with the architectural style of the property, we suggested a modern timeless Shaker kitchen with anodised handles that would also link in style directly with the dining space. In order to create the storage that the family needed and to incorporate an entertaining area, we suggested structural work to remove two metres of wall in order to relocate the kitchen at the back of the property. In doing so, we could then use the length of the longer part of the room to create an extended cream handpainted feature kitchen island with LED lighting strips above the plinth to make a feature of it at night.

We added a 70cm oak pier to one side of the island in line with the remaining part of the wall which allowed for an opening between the TV area to one side and a cooking library area on the other – this also acted as a demarcation between the functional and entertaining spaces whilst allowing for light to flow through what was previously the darkest aspect.

The kitchen island is three metres in length, and features a 30mm Antique Brown granite worksurface. A 50mm European oak cantilever dining bench is attached at one end, with seating beneath. On one side of the island there are under counter storage cupboards together with an integrated Liebherr wine cabinet, which is adjacent to the seating area and where the TV can be easily viewed. There is also a single undermount sink with Chromax tap for food preparation.

On the opposite side of the island are an array of pull-out drawers and this faces the cooking area. This part of the island includes an integrated Siemens microwave oven installed undercounter and above another drawer. The cooking area features similar cupboard units with the same worksurface and at the centre is a 100cm Mercury range cooker with induction hob beneath a 90cm wall-mounted Siemens chimney extractor hood. In order to add a modern statement to the room a bright red glass splashback was installed.

At the far end of the kitchen, we designed the cooling and dry storage areas together, side by side. While all undercounter cabinetry was handpainted in cream, we designed and made a feature floor to ceiling pantry made from European oak, which featured a natural polished finish both inside and out. On either side of the pantry and with handpainted door fronts to conceal them, we installed a tall Siemens larder fridge and tall freezer. We also designed a run of further floor to ceiling storage cupboards.

We also utilised the bay window area to become the overall sink run, which faces the end of the kitchen island behind the informal seating. With further undercounter storage created, we built out the area and used the same granite worksurface on top. Installed within the surface are two Franke double undermount sinks with Franke Olympus Filterflow Taps and beneath in the run of cabinets is a Miele 60cm integrated dishwasher.

View Our Other Kitchen Projects

PRAISE FROM OUR CLIENTS

“Simon Taylor Furniture designed and installed a beautiful farmhouse kitchen in our home in Buckinghamshire in 2012 so we wanted to give them the opportunity to help us with the joinery and cabinetry for our new-build in Bath. As always, their designers were full of great ideas for form, function and finishes. And the cost was substantially better than more local firms. We chose their proposal without hesitation and the results are outstanding – a real talking point for every visitor we have. After-sales support (of which we have needed very little) has been outstanding. We have recommended them to friends, who have been similarly delighted, and we will definitely be asking them to help us in the future.”

“You have now completed the kitchen refurbishment for us and we write to say how delighted we are with the whole process. The workmanship is splendid…It is no surprise to us that much of your business is on a returning basis.”

“We are very thrilled with the final result – it has worked out very well thanks to good planning and workmanship. Please pass on our thanks to Simon and the team.”

“The kitchen and cloakroom you have just installed for us look wonderful and are giving us great pleasure. We would especially like to thank your staff for making the installation as painless as possible and for being unfailingly helpful.”

“From start to finish the job was done with care and attention to detail. The quality of your hand made furniture is obvious, and the skill of your fitters is excellent. We are now the envy of all our friends.”

“The design works very well and we are very pleased with the standard and finish. I’d like to express my thanks to your team, from those I met like Peter, Steve and Brian, to all in the back office and the factory whose contribution is also appreciated.”

“The kitchen looks awesome! I couldn’t be happier with it. There are so many wonderful touches that make it special – I can honestly say that I have been in the kitchen more in the last week than the last eight years.”